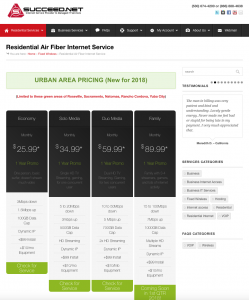 We have released new internet plans and brought back urban and rural pricing to be more competitive where it counts.  Our new plans are the full range of Residential, Small Business, Symmetric Plans, and Full Dedicated links.  In all cases the plans have increased data caps and faster minimum speeds to allow streaming video content (YouTube, Netflix, Playstation Vue, SlingTV, etc).  Some Wireless ISP’s say they have unlimited caps but most, if not all, do behind the scenes shaping so maybe there is no monthly cap, but your speed may be useless during prime time.  As far as we know we are offering the fastest speeds and highest caps of any Wireless ISP’s in our coverage areas.

We are determined to be industry leaders in rural areas for speed and service quality.

You can upgrade to these new plans at any time starting Feb 1st, 2018 for just the difference in price.  No upgrade fees even if your account requires a new generation radio.

In 2017 we did tons of backbone connections between the tower upgrades to licensed gigabit radios so now for 2018 we have started rolling out upgrades to latest generation gigabit access points to allow us to offer up to 100mbps in Urban / Suburban areas (Sacramento, Rancho Cordova, West Sacramento, Natomas, Roseville/Rocklin, Yuba City and nearby areas).  We are also doing some of our larger tower sites such as the Buttes, Browns Valley area, Oregon house in rural areas we expect to complete by 1st quarter.  These new access points have a new technology filter and improves the signals of all existing customers for improvements all around. To take advantage of the new maximum speeds requires a new customer side radio that you will automatically get if you upgrade.